The Community Cooker is a waste to energy technology, invented and developed by PLANNING Systems Services Ltd. 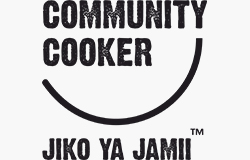 The Community Cooker uses waste as fuel to create energy for cooking, boiling water, baking, creating steam and many other uses. The benefits of using Community Cookers in communities, lower income communities, settlements and institutions such as schools and hospitals, include a reduction in the accumulation of rubbish; improved health; hot water to use for washing and boiled water for drinking; mitigation against deforestation and boosting the generation of incomes for communities.

Research proves that the responsible use of 1 Community Cooker can save the carbon equivalent of burning over 3,000 mature trees as fuel wood and/or charcoal annually.The 2015-16 re-designed brick construction of the Community Cooker and use of a noxious gas scrubber, in the chimney have greatly improved the efficiency of the Cooker. Smoke emissions have been tested by SGS, (the International Materials Testing Agency), and air quality has been found to fall within the regulatory limits of United States EPA and EU emission limits stipulated in the International Health and Safety Guidelines for the incineration of municipal solid waste. Locally produced materials are used in construction and the Cooker can be built in 3-4 weeks, and it can reach temperatures of 800° C - 1100° C. The Cooker is intended as a community owned and managed initiative. Community members are being trained to build, use and manage cookers for economic benefits, as well as increasing their skill set.The Community Cooker Foundation is in partnership with the Prince's Foundation ( based in the UK, and established by the Prince of Wales), to build Community Cookers in Kenya with funding from Global Affairs Canada.